“We had an underground leak between the meter and the house.  After using a leak detection service to get a general idea of the location, Kent made a visit to give an estimate.  The following day, on schedule, he and a co-worker returned and within 30 minutes had located and fixed the leak.  Their charge was considerably less than the estimate!!!   Yes, I’m very satisfied and would not hesitate to use them again.”

“Simpson Plumbing is fantastic! We had busted a water line off on a wall and flooded the whole house, and Brad came in to repair all the plumbing. The same thing happened in our bathroom, and he came and fixed that, too.

Brad has also fixed the plumbing under the bathroom, as well. We had him come out to hook all that up, just to make sure it was done right the first time, and he did it, and it was fantastic. He also gave us an absolutely fantastic price.

I have recommended Simpson Pluming to many of our friends, as well. Brad was very professional. It was a job well done. He was very efficient, and it was just fantastic.”

“Simpson Plumbing replaced three aging toilets and one sink for our bathrooms. Dale, Brad, and their crew did an excellent job. One of the water tanks came with factory defects and they remedied the situation in a professional and speedy manner. They respected our house by keeping the work area clean and tidy.”

“Simpson Plumbing LLC. has very good prices. I like that they will bill me rather than having to pay right away. I am a landlord, so I may be away at work, but he will go take care of it all and then bill me. Other plumbing services won’t do that, and other prices do not compare.

Simpson Plumbing LLC is honest, too. They had one situation where they came out, evaluated everything, and didn’t charge me for it. I would definitely recommend them. I have been using them for about six months. I first used them in my own home, and then started using them for rentals.”

“Kent and Kenny were awesome! So friendly. Very knowledgeable. I like that Kent explained everything to me in detail and he actually saved me some money because they did such a fantastic job! Great representation of the company! Thanks guys!!!”

— Madeline B. in Vancouver, WA

“Love Simpson Plumbing! Been using them for years!”

“Thank you Simpson Plumbing for getting back to me on arranging an appointment on my plumbing problem so quickly.Your service guy Kent was so nice and patiently listened to my dilemma and handled the problem with ease. It means a lot to work with people who care. Very satisfied.”

“While doing a remodel I ran into a plumbing issue and called around trying to find a plumbing company on short notice. I ended up calling Simpson Plumbing and they were the only ones who could get me in on short notice. They sent Kenny Heflin out who patiently worked through a difficult issue and got our kitchen water back up and running. Kenny was thoughtful and had a positive attitude while he worked through the frustrating problem. Thank you Kenny and Simpson Plumbing. I will definitely be using you again.”

“I discovered our STEP system wasn’t working properly and the tank was quickly filling with large amounts of waste. I contacted Simpson Plumbing and they were out the next day first thing in the morning. Kenny was personable and kept us up to date on what he was finding. This ended up being an all day job for him. I know it wasn’t easy as he was elbow deep in the muck. We would highly recommend these guys!”

“Kent made two trips to get our spare shower fixed. He did a great job by finding the problem. He was on time the first visit and early the second (having to do two trips was not his fault, by the way!) He was very kind and courteous, and let me watch out of my own curiosity … putting up with all my questions. Calling for an appointment is easy. That they sent Kent was our bonus!”

“We had a long-standing low water pressure in our house. Kent and Ken came out and after investigation decided the problem was with a PRV at the street meter. They gave us the cost of the project on the spot. Two days later Ken and Chris came out and efficiently replaced the valve. Now we have water pressure that works! Thanks so much, Simpson Plumbing! You were great!”

“I had Kent out to quote replacing my two old hot water heaters with a new 75 gallon one last week. Yesterday Kent and Ken arrived when expected and had the job finished when promised and went beyond my expectations. They were professional and friendly and able to answer other plumbing questions unrelated to my hot water heater. I appreciated them taking the extra time to explain things to me. I will definitely be using Simpson Plumbing again and I will recommend them to anyone needing a plumber.”

“Hot water line in our concession stand burst from the cold. We were able to quickly shut the water line off so it was not an emergency, just urgent. Simpson responded quickly, was analytical in discovering where in the ceiling the leak was, they made a minimal hole in the drywall to access and repair, and did the work quickly. VERY appreciative of their professionalism!”

We would love to hear about your experience, tell us how we did:

Leave Us a Review on Google 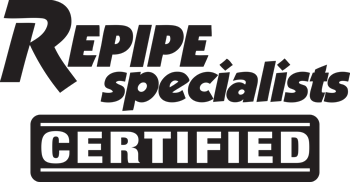